At this point, all that remains is to write an engine that understands the new API.  It should push preformatted strings to the UI, tell it to repaint itself, and ask it for input, then pass the returned input back to the keypress-handling function.

The code for this is fairly straight-forward.  It does have to keep track of old values of some state variables, so that it can know when to update state in the UI and when not to.  The code looks like this:
 engine.lisp

This is checked into the git repository under the tag v2014-12-04.  Also, I just realized that my tags hadn’t been going to the repository.  They have to be explicitly pushed, by supplying the –tags switch to the git push command.

We had a basic calculator running, but it had too much understanding of the interior functioning of the calculator.  We’ve changed this now, there is a UI base class from which user interfaces might derive.  This base class is given preformatted strings for things like stack contents and memory values, leaving the user interface code to concentrate solely on rendering those things it is told are there.  The user interface doesn’t have to know how the stack is laid out, or how to convert stack values to strings, that’s all handled in the internals in this new model.

We’ve defined generic functions on the ncurses class for three generic function definitions.  There’s an :after method on ui-set-active-mode, because the ncurses interface will modify its screen layout depending on what mode (interactive, programming, executing) is currently active.  We’ve also defined functions for ui-paint and ui-get-input, neither of which has an implementation for the base class.

We haven’t put everything together yet, because now the engine has to be rewritten to understand the new API.  Once that’s done, we’ll reassemble the calculator and test.

The current code is checked into the git repository under the tag v2014-12-03.

We have produced our basic interactive calculator with an ncurses interface, but it’s a bit unsatisfying.  The UI code has a somewhat more intimate knowledge of the internals of the engine than is really necessary, which means writing new user interfaces is difficult.  What we really want to do is to switch this around from a system where the UI does the polling to one where the event loop is located in the engine, and the UI knows only as much as it needs to display the calculator as seen by the specific interface.

What we want to produce is a system whereby the user interface sets itself up, paints its appearance, then invokes the engine.  The engine will then call back to the user interface to inform it of state changes and to tell it when and how to redraw itself.

We’ll put this in a new namespace, and create a base class from which real UIs will be derived.  The base class will contain many slots which describe those things that it might need in order to display correctly.  Generic functions will fill in these slots.  We’re defining the base class slots with readers, rather than accessors, to emphasize that the derived classes that define the user interfaces should not be modifying these fields, only reading them.  UIs that must take specialized action when one of these setter methods is called should generally use an :after method, unless there is a compelling reason to do something different.  The painting method will not have a base class definition, as every user interface will be different.

The current generic function definitions are found in a new file, ui.lisp.  They are reproduced here:
 ui.lisp

The current code is checked into the git repository under the tag v2014-11-30.

With this latest set of changes, we have the curses-based version of the emulator more or less complete for interactive use.  We’ve put in more error handling and fixed some bugs.

Soon, we’ll put in the programming mode, which will be a bit more complex than these minor patches.   After that, we’ll start extending the calculator beyond the abilities of the physical calculator.  That means allowing complex numbers, multi-character strings as labels and memory registers, perhaps hexadecimal output for integers.

This change also adds memory registers to the display.

Here’s what happens when you try to take the square root of -1 right now, before complex numbers are permitted: 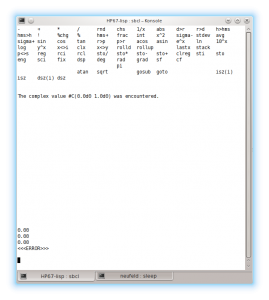 Here is the display with some memory registers loaded, and display digits set to 5: 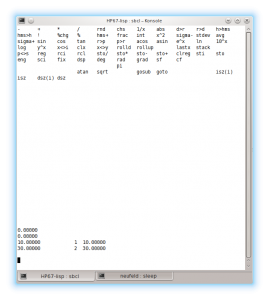 While we’ve got a program that can accept commands and behave like a calculator, it is, at this point, somewhat brittle.  Unexpected input can cause it to enter the Lisp debugger, which isn’t how we’d like to have things behave.  So, it’s time to start making sure that bad input is handled gracefully.

We’ll define an error status region of the screen that will fill in with text when the calculator determines that an error has occurred.  In that case, we’ll mark the stack with an error text and force the user to type the “clx” command before continuing.  This means we have to add a new field to our keypress structure, “can clear errors”, so that we can make sure only that key can be used until the error has been cleared.

Now, in engine.lisp, we cheated a bit on the code that allows an entire number to be input at once.  We used read-from-string on unsanitized input to see if the string contained a number.  This can break in a variety of ways if the string contains, say, unbalanced double-quotes, to name only one of many bad cases.  So, to clean it up, we do a pre-test to verify that the string contains only characters that are legal in a numeric context.  That is, the digits, the dot, the minus sign, and ‘d’ or ‘e’ in either lower- or upper-case, for the exponential notation.

Here, then, is an example of what happens when the user tries to divide 1 by 0: 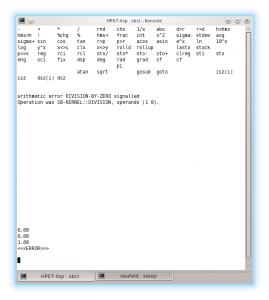 There have been visitors to this page