My former cell phone was a Palm Centro, reasonable for the time, but with an extremely low resolution camera.  Even though I’ve had my Galaxy S III for two years now, I usually don’t think of the camera as particularly capable, just something that’s on hand.  My usual photos with it have tended on the blurry side.  So, I was surprised when two photos I took of a grasshopper on the garden shed actually turned out as good as I might expect with a “real” camera. 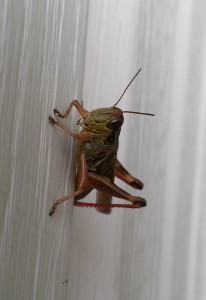 Maybe I just have to use the camera more carefully, and it’ll prove to be better than I thought it was.

There have been visitors to this page